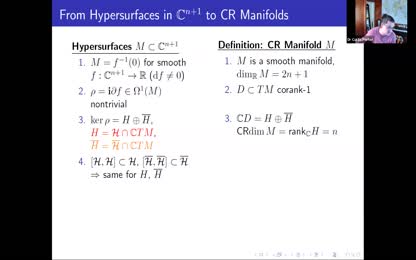 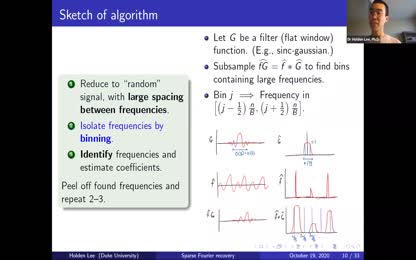 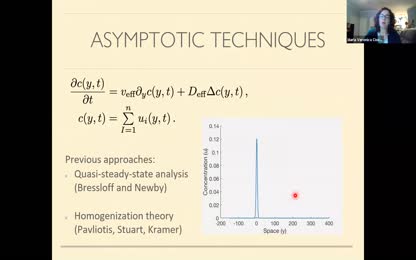 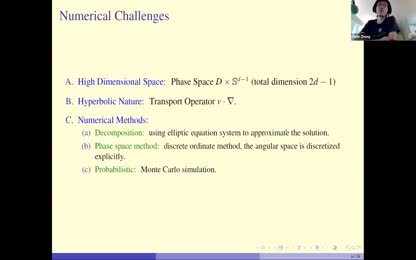 Demetre Kazaras:The geometry and topology of... 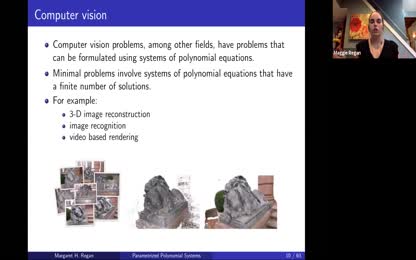 Paul Bendich : Topology and Geometry for...

Lihan Wang : Approximation of Correctors and...

Siming He : Suppression of Chemotactic blow-up...

Chen An : A Chebotarev density theorem for...

CR geometry studies real hypersurfaces in complex vector spaces and their generalizations, CR manifolds. In many cases of interest to complex analysis and PDE, CR manifolds can be considered ``curved versions" of homogeneous spaces according to Elie Cartan’s generalization of Klein’s Erlangen program. Which homogeneous space is the ``flat model" of a CR manifold depends on the Levi form, a tensor named after a mathematician who used it to characterize boundaries of pseudoconvex domains. As in the analytic setting, the Levi form plays a central role in the geometry of CR manifolds, which we explore in relation to their homogeneous models.

The problem of recovering a sparse Fourier signal from samples comes up in signal processing, imaging, NMR spectroscopy, and machine learning. Two major challenges involve dealing with off-grid frequencies, and dealing with signals lacking separation between frequencies. Without a minimum separation condition, the problem of frequency recovery is exponentially ill-conditioned, but the signal can still be efficiently recovered in an "improper" manner using an appropriate filter. I will explain such an algorithm for sparse Fourier recovery, and the theory behind why it works - involving some clever analytic inequalities for Fourier-sparse signals. Finally, I will discuss recent work with Xue Chen on applying these ideas to system identification. Identification of a linear dynamical system from partial observations is a fundamental problem in control theory. A natural question is how to do so with statistical rates depending on the inherent dimensionality (or order) of the system, akin to the sparsity of a signal. We solve this question by casting system identification as a "multi-scale" sparse Fourier recovery problem.

The cellular cytoskeleton is made up of protein polymers (filaments) that are essential in proper cell and neuronal function as well as in development. These filaments represent the roads along which most protein transport occurs inside cells. I will discuss several examples where questions about filament-cargo interactions require the development of novel mathematical modeling, analysis, and simulation. Protein cargoes such as neurofilaments and RNA molecules bind to and unbind from cellular roads called microtubules, switching between bidirectional transport, diffusion, and stationary states. Since these transport models can be analytically intractable, we have proposed asymptotic methods in the framework of partial differential equations and stochastic processes which are useful in understanding large-time transport properties. I will discuss a recent project where we use stochastic modeling to understand how filament orientations may influence sorting of cargo in dendrites during neural development and axonal injury.

This talk consists of two aspects about solving the radiative transport through the integral formulation. The radiative transport equation has been numerically studied for many years, the equation is difficult to solve due to its high dimensionality and its hyperbolic nature, in recent decades, the computers are equipped with larger memories so it is possible to deal with the full-discretization in phase space, however, the numerical efficiency is quite limited because of many issues, such as iterative scheme, preconditioning, discretization, etc. In this talk, we first discuss about the special case of isotropic scattering and its integral formulation, then walk through the corresponding fast algorithm for it. In the second part, we try to trivially extend the method to anisotropic case, and talk about the method’s limitation and some perspectives in both theory and numerics.

I will give an informal overview of the history and status of my field. Local invariants of Riemannian metrics are called curvature, the weakest of which is known as "scalar curvature." The study of metrics with positive scalar curvature is very rich with >100 year old connections to General Relativity and smooth topology. Does this geometric condition have topological implications? The answer turns out to be "yes," but mathematicians continue to search for the true heart of the positive scalar curvature conditions.

Many problems that arise in mathematics, science, and engineering can be formulated as solving a parameterized system of polynomial equations which must be solved for given instances of the parameters. One way to solve these systems is to use a common technique within numerical algebraic geometry called homotopy continuation. My talk will start with background on homotopy continuation and parametrized polynomial systems, followed by applications to problems in computer vision and kinematics. Of these, I will first present a new approach which uses locally adaptive methods and sparse matrix calculations to solve parameterized overdetermined systems in projective space. Examples will be provided in 2D image reconstruction to compare the new methods with traditional approaches in numerical algebraic geometry. Second, I will discuss a new definition of monodromy action over the real numbers which encodes tiered characteristics regarding real solutions. Examples will be given to show the benefits of this definition over a naive extension of the monodromy group (over the complex numbers). In addition, an application in kinematics will be discussed to highlight the computational method and impact on calibration.

We will discuss recent work on computing angle preserving mappings (a.k.a. conformal mappings) using linear methods. We will begin with an intro/reminder on what these mappings are, and why would one to compute them. Then we will discuss the results themselves which show that when choosing a good target domain, computation of angle preserving mappings can be made linear in the sense that (i) They are a solution of a linear PDE (ii) They can be approximated by solving a finite dimensional linear system and (iii) the approximates are themselves homeomorphisms and "discrete conformal".

Paul Bendich : Topology and Geometry for Tracking and Sensor Fusion

Many systems employ sensors to interpret the environment. The target-tracking task is to gather sensor data from the environment and then to partition these data into tracks that are produced by the same target. The goal of sensor fusion is to gather data from a heterogeneous collection of sensors (e.g, audio and video) and fuse them together in a way that enriches the performance of the sensor network at some task of interest. This talk summarizes two recent efforts that incorporate mildly sophisticated mathematics into the general sensor arena, and also comments on the joys and pitfalls of trying to apply math for customers who care much more about the results than the math. First, a key problem in tracking is to 'connect the dots:' more precisely, to take a piece of sensor data at a given time and associate it with a previously-existing track (or to declare that this is a new object). We use topological data analysis (TDA) to form data-association likelihood scores, and integrate these scores into a well-respected algorithm called Multiple Hypothesis Tracking. Tests on simulated data show that the TDA adds significant value over baseline, especially in the context of noisy sensor data. Second, we propose a very general and entirely unsupervised sensor fusion pipeline that uses recent techniques from diffusion geometry and wavelet theory to compress and then fuse time series of arbitrary dimension arising from disparate sensor modalities. The goal of the pipeline is to differentiate classes of time-ordered behavior sequences, and we demonstrate its performance on a well-studied digit sequence database. This talk represents joint work with many people. including Chris Tralie, Nathan Borggren, Sang Chin, Jesse Clarke, Jonathan deSena, John Harer, Jay Hineman, Elizabeth Munch, Andrew Newman, Alex Pieloch, David Porter, David Rouse, Nate Strawn, Adam Watkins, Michael Williams, Lihan Yao, and Peter Zulch.

Spencer Leslie : Intro to crystal graphs and their connections with number theory

I will review some basics of crystal bases for highest-weight representations for a semisimple Lie algebra. I will also point to some connections with number theory through Fourier coefficients of Eisenstein series, mostly in type A.

We consider the whole-space decaying solution of second-order elliptic PDE in divergence form with space dimension d=3, where the coefficient field is a realization of a stationary, uniformly elliptic, unit range ensemble of random field, and the right-hand-side is deterministic and compactly supported in a ball of size \ell. Given the coefficient field in a large box of size L much larger than \ell, we are interested in an algorithm to compute the gradient of the solution with the "best" artificial boundary condition on the domain of size L which describes the correct long-range multipole behavior. We want to show that, with high probability, our algorithm reaches the CLT-type lower bound of error. Joint work with Jianfeng Lu and Felix Otto.

The Trace Formula can be understood roughly as an equation relating spectral data to geometric information. It is obtained via expansion of the trace of certain operators that are associated to the Representation Theory of an affine algebraic group, justifying its name. Therefore, the spectral side of the expansion by nature contains data of arithmetic interests. However, the spectral side is generally less accessible. Meanwhile, the geometric side consists of terms that can be written in a more explicit fashion. The computation of the geometric side, which is now referred to as the Orbital Integrals, thus come on the scene. In this talk, we plan to briefly introduce the general derivation of the (vaguely described) Trace Formula, and demonstrate a few concrete examples of it.

Siming He : Suppression of Chemotactic blow-up through fluid flows

The Patlak-Keller-Segel equations (PKS) are widely applied to model the chemotaxis phenomena in biology. It is well-known that if the total mass of the initial cell density is large enough, the PKS equations exhibit finite time blow-up. In this talk, I will present some recent results on applying additional fluid flows to suppress chemotactic blow-up in the PKS equations.

Classically, a modular form for a reductive group G is an automorphic form that gives rise to a holomorphic function on the symmetric space G/K, when this symmetric space has complex structure. However, there are very interesting groups G, such as those of type G_2 and E_8, for which G/K does not have complex structure. Nevertheless, there is a theory of modular forms on these exceptional groups, whose study was initiated by Gross-Wallach and Gan-Gross-Savin. I will define these objects and describe what is known about them.

Nan Wu : Locally Linear Embedding on Manifold with or Without Boundary

Locally Linear Embedding(LLE), is a well known manifold learning algorithm published in Science by S. T. Roweis and L. K. Saul in 2000. In this talk, we provide an asymptotic analysis of the LLE algorithm under the manifold setup. We establish the kernel function associated with the LLE and show that the asymptotic behavior of the LLE depends on the regularization parameter in the algorithm. We show that on a closed manifold, asymptotically we may not obtain the Laplace-Beltrami operator, and the result may depend on the non-uniform sampling, unless a correct regularization is chosen. Moreover, we study the behavior of the algorithm on a compact manifold with boundary. This talk is based on the joint work with Hau-tieng Wu.

Chen An : A Chebotarev density theorem for certain families of D_4-quartic fields